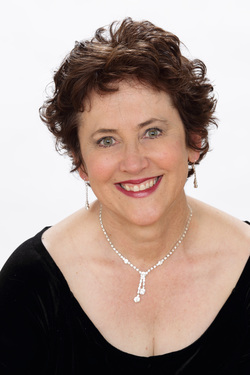 Elena Galbraith received her B.A. from Cornell University and M.M. in Vocal Performance from The  Peabody Conservatory of Music.  Elena has performed in opera, oratorio and  musical theater with such companies as Washington Civic Opera, Harford Opera,  Opera Company of Philadelphia, Greater Miami Opera, Philadelphia Singers, Mozart  on the Square and the Ocean City Pops, is a two-time finalist of the Pavarotti International Voice Competition and a winner of the Eastern Region of the  Metropolitan Opera Competition.  Tucson audiences may know her from her  performances with the Arizona Symphonic Winds, Tucson Pops, Catalina Chamber  Orchestra, Civic Orchestra of Tucson, Tucson Masterworks Chorale, Bach Marathon  and Opera League of the Arizona Opera.  Elena appears in recital frequently  throughout Southern Arizona, performing with many of the Southwest’s favorites instrumentalists in both chamber and solo works ranging in style from Bach to Broadway.  Elena was soprano soloist with St. Philips in the Hills Episcopal Church for 18 years and teaches voice privately.  She loves to garden and lives with her darling husband David, and Gemmie, their very large Great Pyrenees dog.